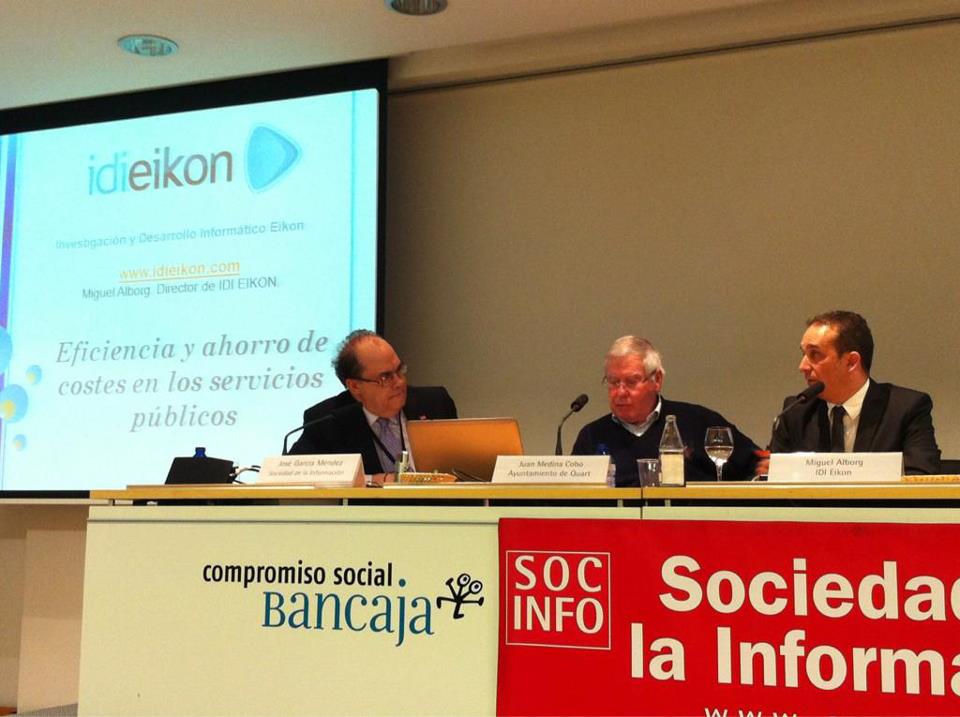 The CEO of IDI Eikon, Miguel Alborg, explained DIEGO and SEED projects focused on the efficiency of public administrations

Miguel Alborg: “Public Administrations have to think in public-private collaboration” (and not only for big names and material infrastructures).

During his speech at the Conference “Efficiency and Cost Savings in public services”, organized by the Information Society journal, Mr Alborg (IDI EIKON responsible) said that governments must re-think their strategies and think in new business models (as public-private partnerships, not only for big names and not only for material infrastructures) to successfully deploy new technologies in the city and better approach citizens.

The Conference was held at the Bancaja Cultural Centre and was inaugurated by the Regional Secretary for Public Administration, Pedro García Ribot, and Director of Information Technology at the Valencian Government, Ms Sofia Bellés. Among the speakers were also the councillor of the Open Government (the first one in Spain), and SEED partner, Mr Juan Medina who gave an overview of the actions that have been implemented in Quart thanks to projects as SEED.

IDI EIKON director, gave a quick look at the company trajectory over 30 years. To win over traditional methods, new technologies need to focus on two key points (that are the object of today Conference): “efficiency and savings” for Governments and/or Agencies that implement them. They have to be accessible and affordable for the city and its citizens. This is the challenge. And this is where projects as SEED with ICTs on its base can help.

After the Diego project (transformation of information), we realized that governments offered many services but most of the citizens did not know about them: they were not given any visibility. This is how SEED was borne: to turn public information (PSI) in institutional advertising (PSI and iPSI messages). An easy to use tool to REUSE existing information without depending on others, and reusing existing infrastructues (= costs savings) and an increase of communication with citizens. Mr Medina intervened here to say the opportunity that means being in a project as SEED to show the Council commitment with new technologies in support of the citizens.

SEED gives citizens access to information from any screen “because we are surrounded by a world of screens and devices,” he recalled. He emphasized the savings for the Council: any information (new, event, announcement, etc) can be produced and display at once and be changed as many times as needed by ourselves. It allows us to reuse existing infrastructure, communicate with other departments and reuse their information, and allow citizens interaction (for example, to receive their complaints, complains that we see as an opportunity to improve our actuation). None of these was possible with traditional methods.